The DaherLAB: connecting startups and industry with the challenges of medium-sized and large companies

Daher is a family-owned business founded in 1863. In 2014, it created an open innovation entity, the DaherLAB, in order to integrate new technologies such as artificial intelligence, blockchain, connected objects and so on. After a trial and error phase, during which even the solutions which had successful ‘Proofs of Concept’ (PoC: the realisation of an idea to demonstrate its feasibility or potential, often after testing) in the company sank into ‘black holes’, a dual system was successfully put in place. On one side, support functions were mobilised from the beginning of the process in order to overcome obstacles and internal inertia, which made it easier to make contracts with startups. On the other side, the innovation process was structured in a sort of ‘push system’ factory with three ‘production lines’ or stages (namely creation of PoCs, industrialisation, and deployment) to ensure that technologies which were of interest to the Group could be completely integrated at the end of the process.

Session organised in partnership with the CEDEP.
Joint session with Industrial Adventures seminar. 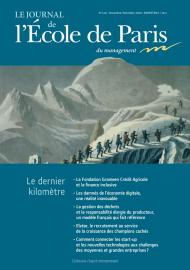