The story of a cultural entrepreneur

The cultural area is an economy like any other. Steven Hearn has worked in this sector for several years and is now convinced that the system of providing grants and financial aid is not the be-all and end-all of culture, and that a logical approach by companies may be appropriate. He founded a consultancy which helped to devise important, flagship projects such as ‘Lille 2004’, Paris’ ‘Nuit blanche’ and the mobile Centre Pompidou. Hearn also formed Scintillo, a holding company which creates, takes over and manages magazines which are in difficulty, cinemas, a publishing house and a film production company. He won the contract for the public service concession of the Gaîté Lyrique, a digital arts and modern music centre owned by the City of Paris. His entire organisation employs a total of one hundred and twenty people, and has a turnover of twenty million Euros. The company develops by self financing. He intends to continue to promote culture by launching two new projects : a business incubator, and an investment fund. He wants to show that investing in culture and the arts is no riskier than in any other sector. 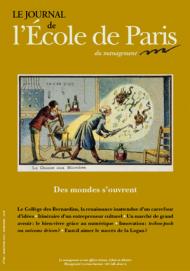