Responsible for the co-ordination of the energy liberation process, OCP Group

The OCP Group, Morocco’s leading company and a major exporter of phosphates, underwent radical change between 2006 and 2011 making it a high-performance and competitive global leader. After the CEO, Mostafa Terrab, had recruited a number of young executives and launched an ambitious plan of further training for them, he thought it was necessary to make use of the energy and talents which they represented for the company, as well as the success of the first transformation curve, to map out and reinvent the Group’s future. Hicham El Habti was in charge of the co-ordination of this process which was called the ‘Movement’. Gradually, the efforts undertaken showed that this ambition was broadly shared within the Group as the employees appeared very clear-sighted about it. Over a period of a few months, the effects of the process throughout the Group satisfied the CEO’s expectations. As a result, he gave the ‘Movement’ the task of transforming the Group. Hicham El Habti explains how this process was carried out, the resulting challenges, and the opportunities it gave to the management of the company. 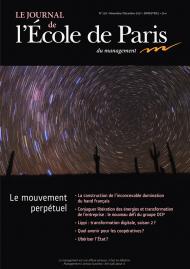