WWF : a mixture of militant and institutional action and partenerships

Like many environmental NGOs (non-governmental organisations), the World Wildlife Fund (WWF), easily recognisable by its panda logo, concentrated its activities on the fight against global warming. The effects of global warming are likely to be so catastrophic that it ought to be a priority for everyone at the present time. From the outset, the WWF has had a policy of partnerships with companies which participate in many of its programmes. However, its partnership with Lafarge, an industrial group whose activities generate a great deal of pollution, hails a new dimension, and has caused internal disagreements within the international WWF network. This partnership only seems acceptable provided that it goes well beyond a mere ‘green washing’ and that it preserves total freedom of expression. This may prove to be very worthwhile : when industrialists rally to the side of ecologists, as at Beddington in England, or on the banks of the Elbe in Germany, the results are spectacular. 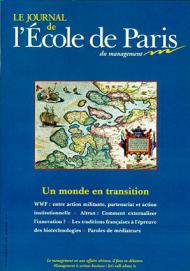