According to a recent survey, the first choice for two-thirds of French job applicants would be to work in so-called 'social companies'. The number increases to 75 % among young job-seekers ! But what is a 'social company' ? Is it another version of the 'citizen company' ? Is it an altruistic excuse for large companies which are in search of recognition ? Regardless of what this expression means, dozens of social entrepreneurs have recently created the 'Movement for social entrepreneurs' which has high hopes for a social, united, uncomplicated economy, and whose initiatives would make it possible to change the world by comparison with capitalist companies. Jean-Marc Borello, who is the president of this movement, used to be a youth worker. He created a diverse group of associations and companies with the intention of serving society, employing three thousand people and having a budget of two hundred million Euros. He champions unexpected ideas in this sector such as economic viability, the practice of assessment, and company mergers which encourage more synergy and adaptability while at the same time reducing costs. 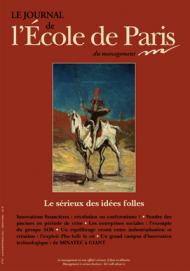